The relationship between Prometheus, the exporter, and the application in a Kubernetes environment can be visualized like this: 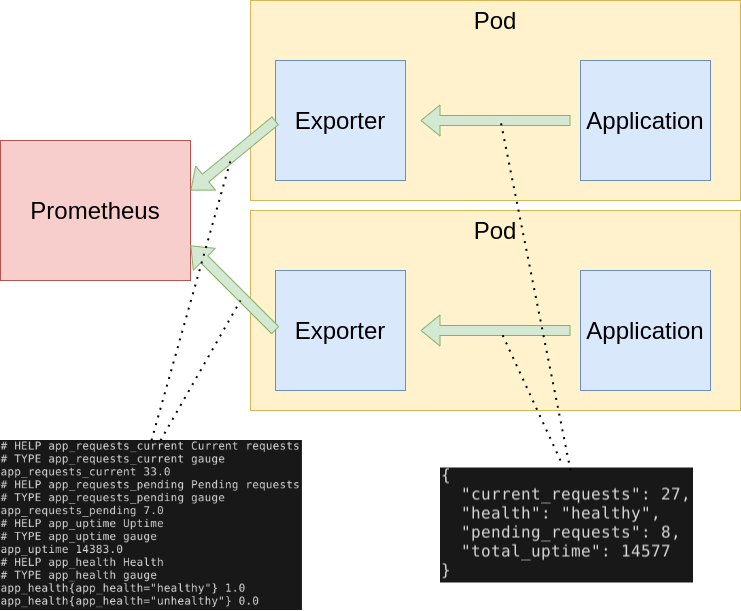 As you can see from above, the role of the exporter is to consume application-formatted metrics and transform them into Prometheus metrics. In the Kubernetes world, the exporter is a container that lives in the same pod as the application it is exporting.

Do I need to write my own exporter?

You might need to write your own exporter if…

If you decide that you need to write your exporter, there are a handful of available clients to make things easier: Python, Go, Java, and a list of others.

As you can see above, there are a multiple languages and client libraries that you can use to create your exporter, but I’ve found that the Python approach is the quickest and easiest to get a working exporter.

There are advantages and disadvantages to choosing Python over something like Go, but one of the main driving forces behind Python is rapid development. So if you’re in a DevOps shop that is tasked with writing exporters with a strict timeline, Python might be the best option for you.

The way an exporter works it shown below:

Let’s see a small but complete exporter implemented in Python (notes and explanation in comments and below the snippet):

In the above code, I defined a helper class AppMetrics to contain the Prometheus metrics and app metric loop logic. Creating the class wasn’t necessary, but I think it is a bit cleaner and more future-proof to start this way and keep the logic and data contained in an object. Effectively the code just loops and makes an HTTP request to the application metrics (available on localhost:APP_PORT/status) and transforms that to the Prometheus metrics.

In Kubernetes, this could be deployed alongside the application container like this:

Now with this exporter, Prometheus can scrape metrics from this pod on port 9877, all thanks to the exporter shim that was put between Prometheus and the application!

Exporters are a much more indepth topic, and I highly recommend you read more about writing exporters. Also familiarize yourself with the different types of Prometheus metrics available.

Prometheus is a really great and powerful tool. At first glance, it could seem like a daunting task to create an exporter, but hopefully this blog post has shown that in just a few lines of Python code you can instrument an effective exporter and start pulling your application metrics right away into Prometheus!

Why You Should Typically Use Named Arguments in Python