Software breaks. It stops doing what we think it should be doing. It throws errors, and it fails in unexpected ways. This is the reality that we live in.

As a software programmer, it is absolutely critical that you are able to debug software. By debugging, I’m specifically referring to an interactive debugging session. Also commonly referred to as breaking into the debugger.

Debugging a Python application is typically done with pdb. As a Python developer, you inject import pdb; pdb.set_trace() or the newer breakpoint() function (as of Python 3.7). When your Python code reaches either of these it will halt code execution and break into the interactive debugger.

Python makes debugging a running application a little tricky. Unfortunately there is no native way to attach pdb to a running process, so we usually have to get a little creative. And adding in Kubernetes to the mix could prove an extra set of challenges for Python.

Let’s see an example of a Python application running in Kubernetes.

The Python application is packaged up in the mycontainerregistry/failing-application:latest image. If you have been running Kubernetes already, perhaps the following illustration isn’t the first time you’ve seen it:

You usually want to show the logs of the failures: 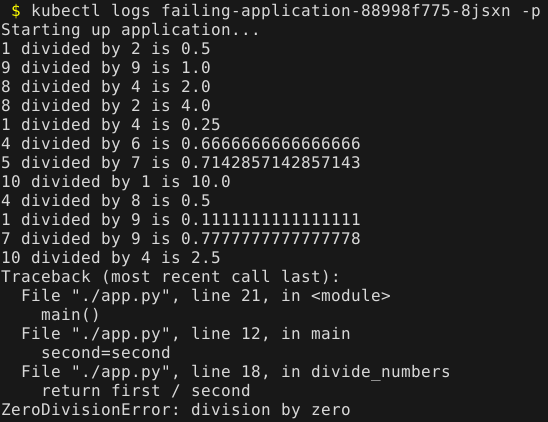 Great, so now we see the error that is thrown. My contrived example is obvious what the problem (and fix) is, but usually debugging is not so easy.

A typical next step is to debug the application. We have a stack trace, and that’s usually a pretty good tool in knowing where you should set your breakpoint.

But… this application runs in Kubernetes, and you possibly (probably) can’t reproduce this issue on your local dev machine (remember, it’s never usually that easy).

We have a few challenges for debugging:

There are a few things here that you can do to break into the debugger, but there is a big consideration. Picture the scenario: You have an intermittent failure in production. Every once in awhile you have a pod failure and restart. You see the logs and the stack trace (just like above). But you can’t really alter the deployment itself. You probably don’t want to bring down the production deployment and all of its pods, as that would cause an outage.

Now you can edit pod.yaml and remove all the unnecessary fields (like statuses and other runtime information). I’ve boiled my manifest down to the following below.

Everything is from the original pod’s manifest except the name of the pod and another important item (note the additional line I’ve added at the bottom):

By specifying command we are overriding the application startup and telling the container to just sleep for a long time. The reason behind that is it allows us to go in the pod before the Python application starts.

To accomplish this we need to do the following steps:

Let’s see that in action:

Now we should be in the pod itself, and we can finish the steps in the container:

I prefer Vim to edit files, so I need to install it before running:

Now I can set the breakpoint where I want in the Python code (I set a conditional breakpoint for my scenario): 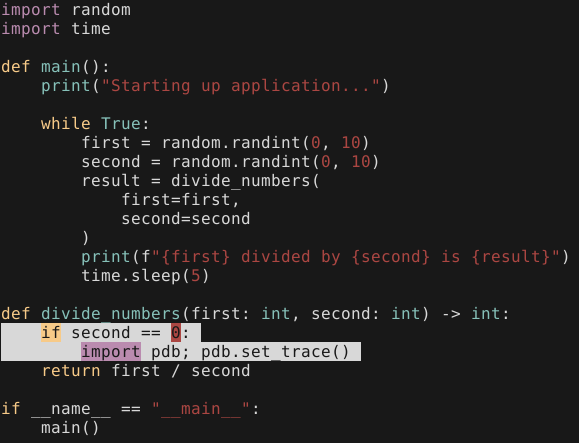 I can save the modification and exit. Now for the next step, I need to manually start the application inside the container. In my case it is as simple as running python3 ./app.py, but this is very application-specific.

Once this is done in the pod, we just want to wait until the breakpoint is hit: 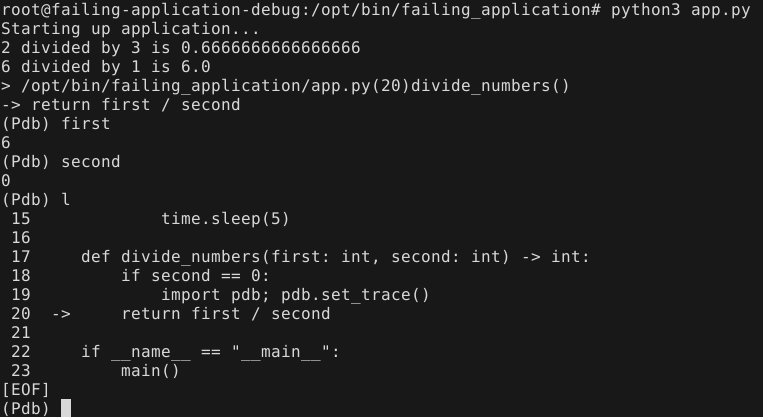 Now while still exec’d into the pod my breakpoint is hit and I can debug my application with pdb, and hopefully uncover the issue.

Debugging a Python application is already a challenging task, and it is even more difficult in Kubernetes. Hopefully this has shown you a way that you can interactively debug your Python application without affecting a production workload (more than it already is!). Happy debugging!

Prometheus is a clear leader in the cloud native world for metrics. Prometheus follows an HTTP pull model: It scrapes Prometheus metrics from endpoints routinely. Typically the abstraction layer be...

Debugging a Python Flask Application in a Container with Docker Compose

Writing and debugging Python applications by themselves isn’t hard: Just kick it off with pdb and you’re in the debugger. But when you start adding layers on top of it like Flask (web framework), ...