systemd is a great, but complex component. One of the things that I love about systemd is that it really empowers and enables the administrator/developer to really understand what is happening.

What is a critical chain?

Let’s take these units for example:

Here is the output: 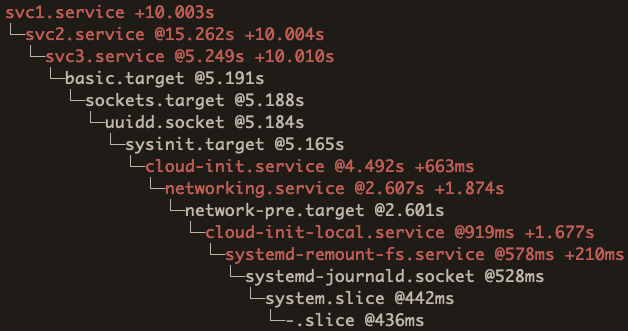 This gives us a lot of great information. The number after “@” is at what time the unit is activated, and for some units (more below) you will see “+” with a number after that, just like above. That’s the amount of time it took for the unit to start.

So if your question is “why did it take so long for svc1.service to get started?”, then this tells you what that unit was waiting on.

This unit will fail (because of the false in the ExecStart) after it has taken the 10 seconds, but you won’t see that reflected in the critical chain: 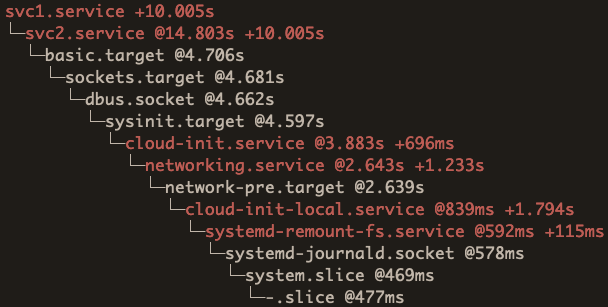 Notice how between basic.target and svc2.service there is a 10 second gap. That is the sleep from svc3.service, but since it failed it will not show in the critical chain. So you have this “hole” in the chain.

You’ll notice in my original service unit files, all services are type oneshot with RemainAfterExit set to yes. I did that on purpose, because for oneshot services if RemainAfterExit is not set (the default), they will be in an inactive state which will cause them to not appear in the critical chain of a unit.

By removing RemainAfterExit for these two services, let’s see what the critical chain looks like now: 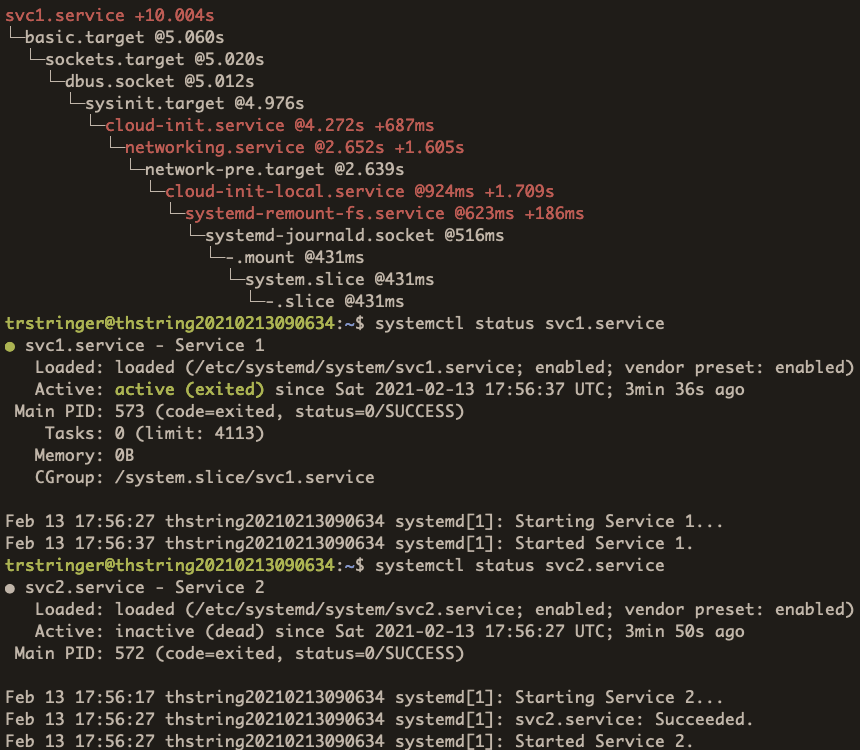 Because svc2.service (and svc3.service) is inactive (shown by systemctl status svc2.service), you can see that they are missing in the critical chain.

The original services were all oneshot services. Take a look at this blog post that I wrote that describes the differences between oneshot and simple services, which will explain that a simple service will have its follow-up units started immediately, instead of waiting until completion like a oneshot service. So let’s change all of our services to simple by replacing Type=oneshot with Type=simple.

You can see now that the critical chain highlights that difference in the simple service types, we no longer see the “+” and time, because the follow-up units (svc2.service from svc3.service, and svc1.service from svc2.service) do not wait for the unit to complete, it just starts immediately. We see that with the “@” times, which illustrate that there is no real delay between the units’ start times.

Not the complete story

This blog post was intended to also show that the critical chain cannot be the complete story. It showed examples of other units impacting a particular unit’s starting time, but not necessarily appearing in the critical chain for that unit.

You have to utilize other tools, such as listing dependencies, which can also paint the picture on what happened:

As you can see here, even if svc2.service doesn’t show up in the critical chain (maybe because it is a oneshot that doesn’t RemainAfterExit, or maybe it failed) you can see that it is indeed a dependency of svc1.service.

Another helpful tool is to just cat out the unit definition with systemctl cat <unit>.

Hopefully this blog post has showed another tool, critical chains, which can help you in understanding why certain units are being started at different times. By knowing how to diagnose and investigate systemd units, it will contribute to quicker resolutions and more understanding!

Authenticate to Azure from Python

Find the systemd Unit that Owns a Process

Recently I had to do a little troubleshooting and I was able to pinpoint a particular process ID from ps that I was interested in. In particular, I wanted to know which systemd unit was responsible...

If you have ever had the task of troubleshooting a modern Linux machine, you have undoubtedly used journalctl to display log messages. The journal is the logging mechanism for systemd machines, and...

DefaultDependencies Can Cause a Unit Ordering Cycle

Recently I ran into an issue that had me a little confused and troubleshooting for awhile, so I wanted to document it here. If you create a systemd unit that should be run before another unit, you ...