Last blog post I talked about how to Deploy to AKS from GitHub Actions. This was great and quick because it utilized GitHub-hosted runners. For many users and projects, this is completely fine. But sometimes you want more control over your pipeline runners (for instance, if you want to start utilizing managed identities to interact with your Azure resources - e.g. AKS in this instance). The way you can get control over that is by telling GitHub that you want to use your own runners (also known as, self-hosted runners).

All of the accompanying code and instructions for this blog post can be found in a forked repo from the original GitHub-hosted runner repo.

There many advantages to self-hosted runners:

There are also disadvantages to self-hosted runners:

We had to make very few changes to the pipeline itself, but now we are no longer using a service principal to access our Azure resources (Azure Container Registry and Azure Kubernetes Service cluster). So we need to grant access to these resources for the managed identity that the VM runs with.

First, grant the managed identity permissions on the container registry:

Now give the managed identity the permissions to get the Kubernetes config and write to the default namespace:

We want the GitHub Actions runner process to run as a system user (following the principle of least privilege). SSH into the new VM create the user:

Now we need to ensure that this new system user can run sudo (with no password) for only the commands that it needs to install dependencies (more on that soon). Add the following line to /etc/sudoers on the runner VM (you should do this with visudo):

Creating the runner in the repository

Now that the VM is mostly setup, we need to go back into GitHub in our repository and select Settings -> Actions -> Runners -> New self-hosted runner. Follow the setup instructions and run those commands on the runner VM through SSH. Once the config has been completed, you should be able to start the runner:

The runner should now show a message:

And back in the repository you should see the runner ready and waiting:

We’ve setup our infrastructure, but now we need to make a few modifications to the workflow and secrets. The major benefit of using a managed identity instead of a service principal is that we don’t need to store and handle the client ID or secret to authenticate to the Azure resources. So now our secrets only includes ACR_NAME, CLUSTER_NAME, and CLUSTER_RESOURCE_GROUP_NAME. Much more secure and easier to manage without the SERVICE_PRINCIPAL_* secrets!

But how does our workflow change? I think the easiest way to visualize this is with a git diff from the GitHub-hosted runner workflow to our new self-hosted runner: 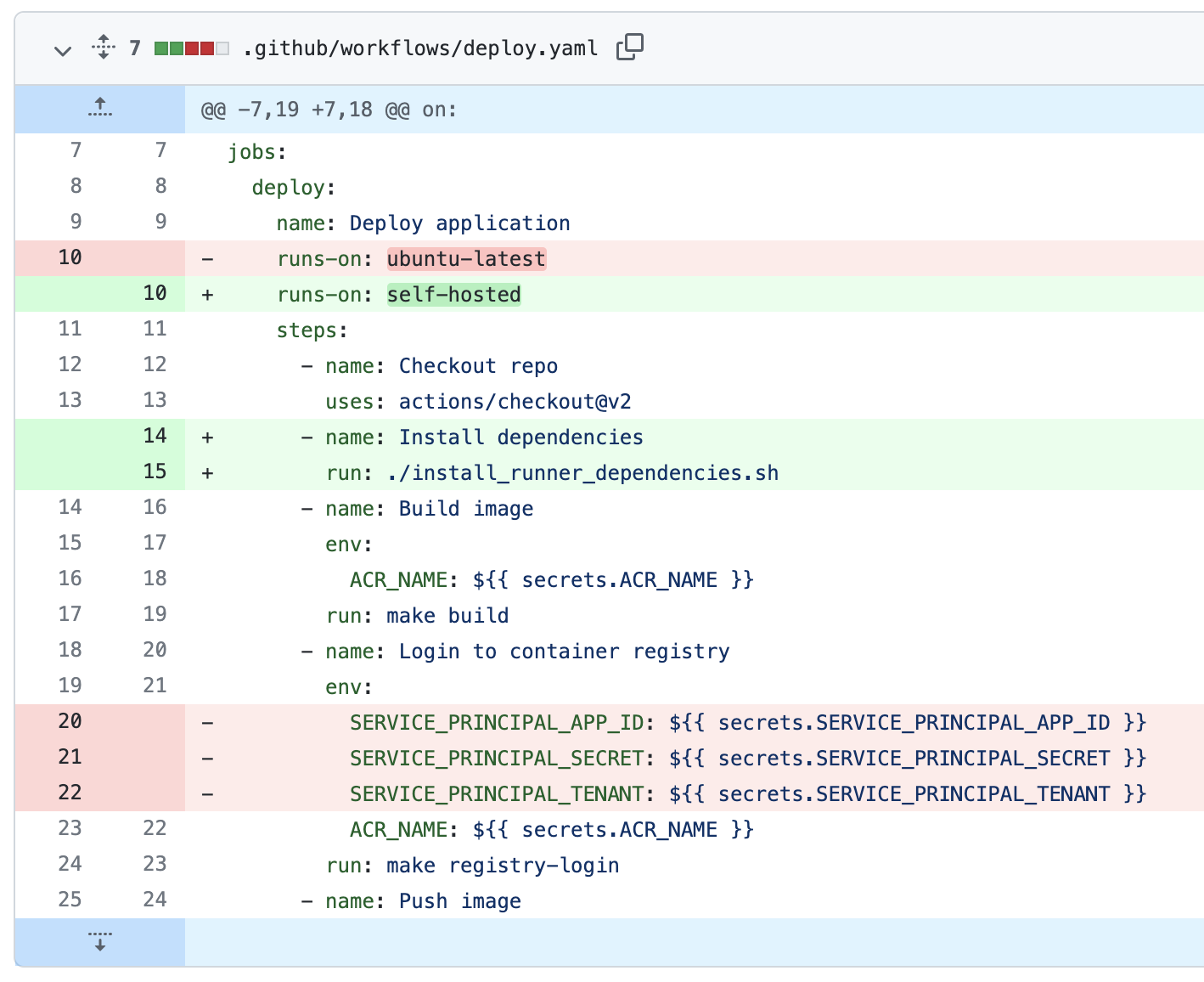 The changes we made were that we now use the self-hosted label. And we remove the references to the SERVICE_PRINCIPAL_* secrets! And because we aren’t using GitHub’s runner image anymore, we need to install all of the necessary dependencies.

Now in the Makefile we do az login with --identity instead of having to pass service principal credentials.

Like mentioned above, the Ubuntu Focal image I’m using doesn’t have a lot of the dependencies installed already so I need to handle this from the pipeline. I created an install script to handle this logic, and it is invoked from the workflow:

This run can either be run manually (because it still has the workflow_dispatch trigger) or with a new tag release. Now on the runner we can see the workflow runs:

This blog post has explained why you would want to use a self-hosted runner with GitHub Actions, and some of the disadvantages to doing so. I showed how to setup a runner in your Azure subscription and utilize a managed identity to connect to the Azure resources for continuous delivery and deployment for a more secure and easier to manage solution.

Deploy to AKS from GitHub Actions

Deploy to AKS from GitHub Actions

Creating a CI/CD pipeline to deploy to your Kubernetes application is a really great exercise to make an efficient and automated way to deliver your software. This blog post will show how to deploy...

Update: Since writing this blog post, I have found that you can save another few dollars by using a Basic SKU load balancer! Note: This blog post is intended only for non-production Kubernetes wor...