SSH’ing into any Linux machine is the common way to interact with it. But there are times when you might run into issues and having Linux running in a cloud provider, like Azure, can add another layer of complexity between you and the VM. There are some common errors when you fail to SSH, and I’ve recently written about how to troubleshoot the infamous permission denied publickey error.

In this blog post I want to talk about another common error you may run into when trying to SSH:

This typically means that you are unable to connect to the VM because there is some network protection blocking your request. So how can you troubleshoot this from Azure’s side? This is one of the few times that I think it is probably easiest to just go into the Azure portal. Locate your Linux VM resource and click on Networking: 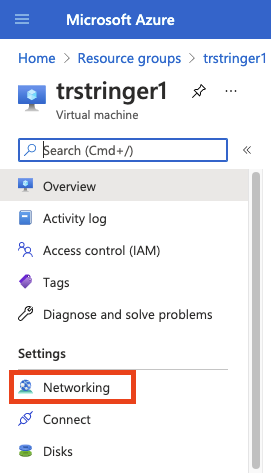 Here you will see the networking for the VM, including a listing of network security group rules. In my case, I don’t have many so the problem might stick out quickly. But one of the tools I like to use is viewing the Effective security rules:

And here you can see the listing of effective security rules. The are a few things to understand here:

The exercise is to look down this list of rules, starting at the higher priority (numerically lower number) rules and see where your connection (source host IP address and port, which is TCP 22 for SSH by default). In my example, I can see that the deny-ssh rule is what is causing my SSH connection to fail.

The fix for the issue is dependent on your situation and your environment. SSH access is, by definition, a vulnerable surface attack area (especially from the public internet). As a note, allowing SSH traffic shows an appropriate warning in the portal:

Hopefully this blog post has showed a way to troubleshoot a common cause for the Connection refused error when trying to SSH into an Azure Linux VM!

When you are working with Linux VMs (IaaS) in Azure, the most common way to access the VM is through Secure Shell (SSH). A common issue when you’re trying to SSH into your Linux VM for the first ti...

Access the OS Disk from an Inaccessible Azure Linux VM

When working with Linux VMs in Azure, there can be a few situations where your VM is not accessible. Say, for instance, you receive an OS provisioning timeout error. This is just one example, but i...

I hear this all the time, and I want to set the record straight: Just because you are part of a Microsoft “shop” (an organization or team that focuses heavily on Microsoft technologies, such as Azu...