One of the great things about Kubernetes is that it abstracts away the underlying compute so that we only have to worry about our application workload running on the cluster. But there might be a chance that you need to connect directly to the underlying nodes in your Kubernetes cluster. If you manage your own cluster, that’s most likely as easy as just SSH’ing into your nodes. But when working with a managed cluster, such as Azure Kubernetes Service (AKS), it could be more complicated than that.

The Microsoft docs illustrate how to SSH into AKS nodes. One glance at that thorough documentation and you’ll realize that this is not a trivial operation. In fact, it’s quite long and tedious. Imagine having to do that more than once…

So instead of doing this manually, I decided to write a script to automate this process: az-aks-ssh (GitHub).

Note: this script is current in alpha and should not be run in a production environment.

The basic design of this process (whether manual or automated with the script) is that you create a pod in the AKS cluster and then kubectl exec into the pod, and then SSH into the desired agent node. I added a few “features” to this script. One of those is unique SSH key generation and usage by node. It’s not a good idea to reuse SSH keys for multiple hosts/purposes, so this script takes care of that.

Here is a visual illustration on how this process works: 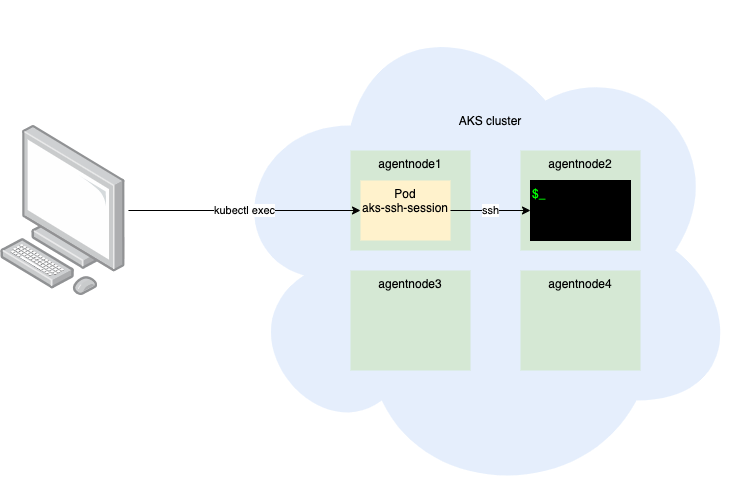 The usage of the script can be displayed by running it with no parameters:

You have the ability to run a non-interactive command into the AKS cluster node:

You’ll see similar output (as you can see below, this script is verbose by design so the user can see the process as it happens):

You can see that the last line of the output is the command result (hostname in this case).

Likewise, you can run an interactive session by omitting the --command parameter:

You will then be in an interactive SSH session with the AKS node:

Now you can see that I am in an SSH session with this agent node. Like always, run exit to leave the session.

One final note is that there are elements put in place to allow this process. Namely these are the generated SSH keys for connection to the nodes, as well as the aks-ssh-session proxy pod that is used. You can remove these items by passing --cleanup to the script:

Hopefully this script can make the task of SSH’ing into AKS nodes much simpler and automated for you as well!

When dealing with software that you run in Kubernetes, it is a common requirement to have your applications running on certain types of underlying infrastructure (virtual machines). Perhaps your so...